OK so you may not know this but I've always loved reading about and researching into the Great War. Why? You loyal folk might well ask and it's nothing to do with the centenary. It stems from childhood, in fact, stems from finding big fat books sitting on the shelves at home, obviously belonging to my dad, and being curious about them. One book which particularly grabbed my attention was called 'The First Day on the Somme.' I remember the cover which was black, white and red, but not the author. Sorry. However, though I didn't read it all, being young, I was very moved by what I did read, and the biggest shock was the number of soldiers who died on that first day. It's this which is behind the lyrics of my band's new single, 'May Day 1916'. It's about the letter sent by one woman to her husband who's on the Western Front. She knows nothing about The Somme and what's to come. Her letter brings a little piece of home to her husband, a little something about the children, the garden, that day's celebration. Nothing about what she really feels, her fears, her loneliness. She has no idea what's going to happen to her husband, or if he'll ever come home. Probably he doesn't. The letter is written with love. Anyway, we like it so much we thought we'd try to sell it and raise money for the Royal British Legion in the run up to Remembrance Day. So we're trying really hard to push it. We release the single on October 14. Available on download or on CD (one of four songs). If you're interested have a look at it on Youtube and wish us luck. Thank you. 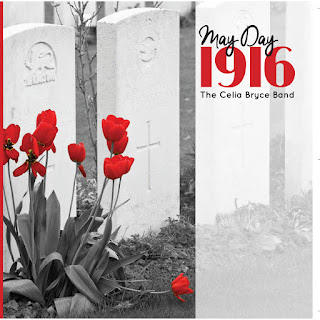